for more than twenty years the canadian project vromb a.k.a. hugo girard has masterly transformed a plethora of different inspirations into sound, resulting in a multitude of releases based on many topics. for the realization of his recent opus, girard drastically changed his approach: instead of choosing an exterior subject he wanted to transcribe the tones and voices generated in his own mind, keep hold of them and etch them onto record, and thus he is the choreographer of imaginary sounds which become physical musical entities. ‚chorégraphie‘ demonstrates vromb’s incredible skills at handling his‘ analog electronic equipment, which means in large part the sound manipulations are created by directly using the machines with only a little part of computer assisted sequencing, audio montages and overdubs. subliminal trance-inducing beats, mighty pulsating sub basses and repetitive sequencer textures enriched with surrealistic ambient dronescapes and hugo girard’s recognizable voice generate a steady but everchanging semi-ritualistic flow which was, is, and will be associated uniquely with the sonic world of vromb. a wonderfully composed album which allegorizes the disposal of the sounds created by an artist’s inner self, and at the same time an essential listening for those with a different view. highly recommended. 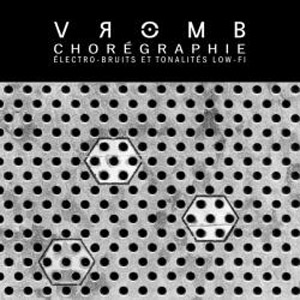