Following in the foot steps of the acclaimed „Lapse“ album released in 2005, „Summoning The Void“ offers a deeper and more refined rendering of previously explored themes. This is unmistakably VISIONS, but a notch above in terms of spaciousness and musicality and there’s an even more profound spirituality transpiring from these tracks. Passages that are more solemn and austere give way to ritualized motifs where voices from the void whisper words beyond words. And then, calm drifts bearing a more aerial and streamlined quality emerge, from which shards of light cut through the massive pitch-black backdrop where a bulging red sun awaits in the distance, endlessly and slowly consuming itself. Beyond that, nothingness. Void. This is the journey where Visions wants to lead us, a world and non-world of infinite proportions, a macrocosmic voyage through the hidden and intangible vastness of all…for we are stardust… Edition of 1000 copies in A5 foldout cardboard sleeve with embossed lettering. 5 Tracks. Running Time 53:90 24th circle/Cyclic Law 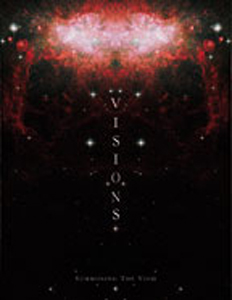