V/A – ANTHOLOGY OF CONTEMPORARY MUSIC FROM THE MIDDLE EAST – CD

Following the Anthology of contemporary music from the African continent, this new collection released by Unexplained Sounds Group, focuses on experimental and alternative music from the Middle East and includes artists from Egypt, Lebanon, Turkey, Bahrain, Kuwait, Iran, Israel, Iraq, Palestine, Jordan, Afghanistan, Cyprus. A kaleidoscope of sounds by artists rooted in their traditions, but at the same time projected towards the new frontiers of music. The minimal melody of Ahmed Saleh introduces us to the exploration of sound paths that unfold through the electronic experimentation of Cenk Ergun, the radical improvisation of Mazen Kerbaj, the pulsating and disturbed electronic of Tony Elieh, the noise drone of Nyctalllz, the tribal and psychedelic music, in the Velvet Underground style, by Afghan musician Naujawanan Baidar, the lysergic ambient of Bloom Tribe, just to mention some projects included in the compilation. An intricate and exciting sound puzzle in which the listener will find his favorite way to a new promised land of sound. 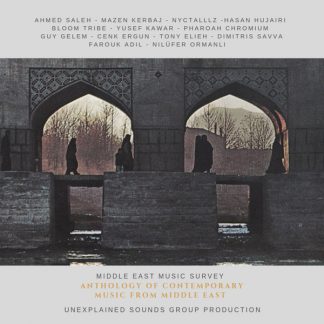