Born in Pontypridd, South Wales to a musical family, Thighpaulsandra developed an interest in modern classical and electronic music at an early age. Whilst still in school he formed an avant-garde rock group incorporating influences from his admiration for experimental music pioneers John Cage and Karlheinz Stockhausen. Through experiments with his group The Rachel Dennis Sisters he was offered a job in a local recording studio which eventually led to him becoming the manager and house engineer. One of his many clients was former The Teardrop Explodes frontman Julian Cope who, after learning of their mutual appreciation of Krautrock and electronics, invited him to join his current group as keyboard player. During Thighpaulsandra’s tenure with Cope he garnered the attention of Coil’s John Balance. After an introduction via his management, the two became great friends and Thighp was asked to join Coil shortly after. Thighp has also released several solo albums, some of which shift between experimental and rock, others, like The Lepore Extrusion, are drone albums. The Lepore Extrusion is reminscent of Thighpaulsandra’s work with Coil, a fluttering drone offset by slow-motion sound effects. It creates an eerie and dark presence, quite at odds with the hyper-glam persona of its subject, that gradually attracts a series of tones and timbres to pierce the shadowy cosmic glow. Originally released through Brainwashed, this album was very hard to find outside the US and soon deleted. For this re-issue, Thighpaulsandra has added a bonus track that wasn’t featured on the original release. Full tracklist: 1. The Lepore Extrusion 2. The Lepore Rejection. 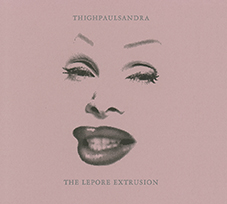