THE RESIDENTS & RENALDO AND THE LOAF – TITLE IN LIMBO – CD

The fourth step in our Renaldo re-issue programme and this time we have a very special item for you: Title In Limbo is an album that was recorded with The Residents in San Francisco in 1981.The bands played a very experimental jam session together and went back to these recordings 2 years later, in 1983. Title In Limbo finally came out in November of that year on vinyl. 1998 saw the first complete CD release as a numbered limited edition on Ralph America, copies of which are scarce and now collectors‘ items. But that CD differed from the vinyl in that some tracks had short fade ups applied to them which did not truly reflect the original release. So we are excited for the first time on CD to now offer this album re-mastered with all tracks fully restored to their originally recorded states. Also included is a booklet with rare photographs and of course the lyrics for all the songs.
KLANGGALERIE gg200 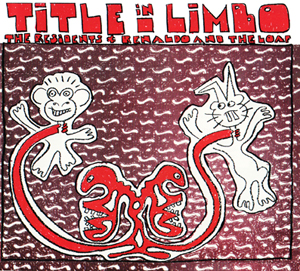