Excellent recommnded new project from UK,. the The Psychogeographical Commission is a post-Industrial Neofolk/Dark Ambient band based between Glasgow and Newcastle in the UK. The Commission was formed at the start of 2008, by S.: (real-world Instruments and vocals) and Hokano (unreal instruments), to explore the many interfaces between the built environment and the people who inhabit it through dérive, magick and sonic experimentation. After a great deal of time wandering the back streets of London and other large cities looking for the spirits which now dwell within them, they came to the conclusion that the psychological make-up of cities is now at odds with the populations inherent rural based mythology. People aren’t evolving to cope with cities fast enough to keep up with the constantly shifting cityscape. To start approaching a remedy for this they set about creating music which blurs the line between the real and imagined landscapes in order to allow individuals to revaluate their own mythologies and provide new ideas to bring them closer to harmony with their urban surroundings. Named after the Roman mythological ‚Spirit of the Place‘, the album (Genius Loci) attempts to explore further the Psychogeographical nature of our built environment and is therefore written to be played whilst interacting with a city. The album was originally released as a CDR at the beginning of 2009 but sold out due to overwhelmingly positive reviews from places such as Zero Tolerance Magazine (who gave it 5/6 and likened it to Coil and Nurse with Wound), Compulsion Online (who likened it to Coil and Death in June), Judas Kiss (Coil, Einstürzende Neubauten and Current 93), and numerous others. This is the re-mastered, re-packaged and glass-mastered reissue of that album check out here: www.myspace.com/psychogeographical 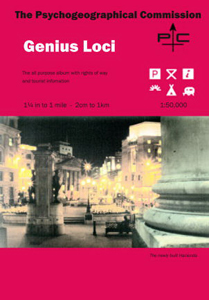