Always ahead of the curve, bringing seminal lost works back into centre of our consciousness, we have done it again. A true joy in listening and historically as important as they come, their first ever reissue of The Gerogerigegege, 直美のオナニーと若草寮案内 RE-ISSUE“ („Naomi’s Masturbation and Wakakusa Dormitory Guide RE-ISSUE‘), turns everything on its head (and not only that) and is not to be missed. This carelessness and the unintentionally time-deteriorated, rough sound quality, all of these barbaric elements, are inevitably related and composed in an orderly manner.
This is where I find the perfection of this form of expression. There is no doubt that this work is filled with the creepiness and stench that can appear only because there is no artifice, intentional design, manipulation of information, or any unnaturalness at all.
‘’The sound source for this album was pre-existing ero cassettes. Apparently, Yamanouchi did not change the sound of the cassettes at all, and yet the sound of the album is the sound of GeroGeri. The first reason is that the ‘obscenity’ that can be felt in Gerogeri’s worldview and the obscene worldview of the ero cassette are very similar. As we look over Gerogeri’s catalogue of past work, it is clear that obscenity is one of the major elements that make up Gerogeri’s world. The many empty and meaningless sounds contained in the ero cassettes are also distorted by the ’noise‘ that is a byproduct of poor recording conditions. In addition, the mental pictures conjured by ‚closed rooms‘ and ‚men and women‘ combine to transform the sound into something mysterious and obscene.’’ Eiji Yaginuma 2021
This single side C-60 cassette is conveniently placed in a foam rubber seat and comes inside an elegant black wooden box with laser engraving and magnetic closure with a numbered certificate in 200 copies, two folding with extensive liner notes in English and Japanese by Eiji Yaginuma and a doble face A4 insert. A seminal document, writhing with energy and often primeval animalistic energy, stayed by the control of the narrator, that offers a crucial insight into Gero’s early actions, whether in practice or source, when it can not be easily defined. 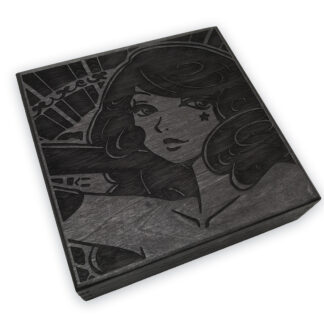