From their roots in the most controversial and confrontational alleys of power electronics, Sutcliffe Jugend have grown and reinvented themselves with each new release. It is no exaggeration to say that, after thirty years, they are creating the best work of their career. „Nude And Full Of Wounds“ is the latest intriguing episode in their progression. Matthew Soko, whose spoken vocals shape the album (and whose artwork and body form the visuals), gives this perspective on its genesis and his participation: „Nude And Full Of Wounds began as a phrase spoken to me in passing and brought to life as the project evolved with the atmospheric music that was fed to me by Kevin (Tomkins) and Paul (Talyor) . The ocean exists as a constant metaphor and the industrial sounds by industrial legends Sutcliffe Jugend further define and guide the themes present in the spoken work that leave the listener with a sense of isolation“. 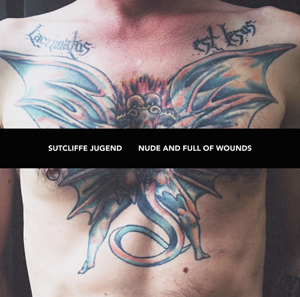