VINYL: LE300 on oxblood vinyl with large 8p 12″ booklet
Solanaceae is the creation of Kim Larsen, which portrays a more psychedelic folk feeling than usually put forth in his :Of The Wand & The Moon: project. However the unmistakable voice and songwriting is still Kim Larsen’s, which probably leaves this album as close to an :Of The Wand & The Moon: album without being that. The album features 13 songs with themes of magick, woods and mysteries, and are mainly written and performed by Kim Larsen with kind help and appearances by Chelsea Robb (Arrowwood), Pythagumus Marshall (Novemthree), Michael Laird (Unto Ashes), John van der Lieth (Sonne Hagal), Fenella Overgaard (:Of The Wand & The Moon:), Vincent Farrow (Solblot) and Anne Eltard who also appeared on the first :Of The Wand & The Moon: album. HEIM006LP (Heidrunar/Myrkrunar) 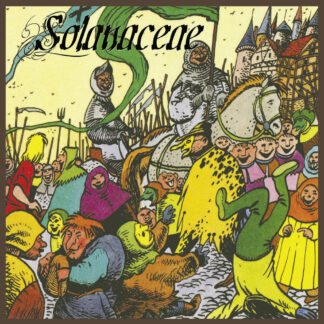