Earlier this year, ROME made a stylistic detour towards spiritually tinted, doomy, idiosyncratic avant-garde folk with their latest full-length ‘Hall Of Thatch’. However, listeners should expect yet another stylistic turnaround from mastermind Jérôme Reuter within the year. The Luxembourgish songwriter’s love for experimentation has not diminished, on the contrary, and thus he does not shy away from taking bold steps backwards either: from no-wave folk and chanson back to his own neofolk past. Longtime fans will be glad to learn of this transition. However, ROME also show a side of dark folk which, due to its seductive straightforwardness, showcases a new and surprising element as well. ‘Who Only Europe Know’ captivates with its simple, even monotonous arrangement, driven by repetitive machine samples and acoustic guitars.

Once again, Reuter has taken the fate of Europe as the thematic focus of his work, although with a new, energetic despair and, yes… anger. Against a backdrop of guitars and howling machines, Reuter deploys his powerful, enraged voice to sing of Europe’s precarious situation. The B-side of this strictly limited 7″ single calms the nerves somewhat by serving up tranquil piano collages and spoken words. This teaser release proves yet again that ROME are not afraid to tackle difficult issues. ‘Who Only Europe Know’ is a bombshell of a song; captivating yet disturbing and announcing a highly promising album. 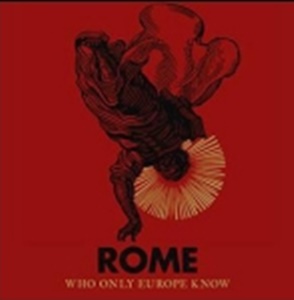