“The West Knows Best” is the third single from the upcoming album “Le Ceneri Di Heliodoro” (The Ashes of Heliodoro) on which witty social commentary is coupled with neofolk’s finest brand of sarcasm. Screw the Rest, The West Knows Best – Reuter sings of the fall of the West and one can only wonder at the tongue-in-cheek sentiments portrayed in this inadvertent sing-along of the reluctant capitalist and its unapologetic portrayal of today’s plague-ridden relations between the formerly new West and the Old Heart of Europe. All hail the stumbling the child, coiling for the vanishing light. The B-side is a gripping and freshly recorded live-version of one of ROME’s absolute classics: “One Fire”, a song originally issued as part of ROME’s seminal “A Passage to Rhodesia” back in 2014. This anthem which constitutes an inherent part of each and every live show was recorded at Heliopolis Studios in Reuter’s adopted home of Eumesville.

This strictly limited 7-inch vinyl is being manufactured as exclusive tour merchandise and there will only be a small batch of copies made available online for a very short period of time. So grab what you can! 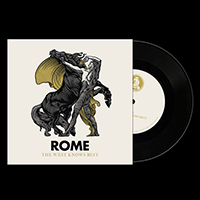