STRICTLY LIMITED COLLECTOR’S VINYL EDITION OF THE TEASER SINGLE FROM THE UPCOMING ALBUM ‘LE CENERI DI HELIODORO’. • Black 40g 7″ vinyl • High quality, super-audiophile disc – German pressing! • Sturdy cardboard sleeve • Reverse board printed cover • Exclusive bonus track „The Secret Germany (Eumesville Session)“ • Strictly limited to 500 copies
‘One Lion’s Roar’ is a proud, vitalistic outsider anthem, if there ever was one. Ultimately, the artistic reconciliation of all contradictions is alien to ROME mastermind Jérôme Reuter’s artistic outlook: on the contrary, he seeks the noisy impact and confrontational juxtaposition to draw creative energy from the rupture of things. As is the case with the duality extolled in this song. Anyone who grows up within an alien pack develops, or so it seems, a fundamental scepticism towards solidarity. And far removed from these frictions, the lion – the band’s emblem and patron saint – sits enthroned above all. In the Roman Mithras cult, the lion symbolises the sun itself. Thus Hercules’ defeat of the lion is intended to express the superiority of the human spirit over animal nature. With ROME, the lion is the loyal dissident and proud outsider, yet fierce defender of what is his own.
With ‘One Lion’s Roar’, ROME deliver a real singalong hit reminiscent of classics such as ‘One Fire’ or ‘Swords To Rust’, and thus considerably shorten the wait for the new album, ‘Le Ceneri Di Heliodoro’. Keen concertgoers will already have noticed that the band have been performing this instant classic live a number of times and that other tracks from the new album have been gradually incorporated into the new live set.
The B-side of this 7″ is a live version of ROME’s George/Stauffenberg themed anthem ‘The Secret Germany’, the original version of which appeared on 2016’s ‘The Hyperion Machine’. 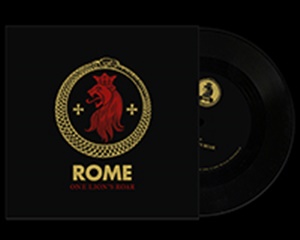