Phase Fatale creates techno from disparate subcultures of dead industrial with a post-punk spirit, bringing back an immediacy and aggressive energy sorely missing in the contemporary electronic landscape.
With „Redeemer,“ the debut full length from Phase Fatale, conceived by DJ and producer Hayden Payne in New York by way of Berlin, deepens his exploration of the tension–both sonic and conceptual–begun on his EPs released over the last three years on the Jealous God and Unterton labels. In intent and impact, Phase Fatale bears allegiance to the surreal influence of Juan Mendez aka Silent Servant, with whom Payne has worked closely in collaboration. It is therefore appropriate that the 12″ EP featuring three extended mixes by Silent Servant from „Redeemer“ („Order of Severity,“ „Operate Within,“ and „Spoken Ashes,“) will be released in tandem.
A defining trait of Payne’s music is his ability to reconcile and integrate the underground character of his past into a precise story on the dancefloor. His subtle incorporation of guitars and vocals never make way for disclaimers or apology. They puncture the face of the mix or recede into the latticework of the sequence, always stalking the perimeter. While maintaining a cold energy that isn’t begot with nostalgia, he edits and extracts the essence of his influences into a unapologetic future. His malaise is repurposed for the degenerated present–in his atmospheric universe of minimalist/maximal percussion.
Beginning with the opening track, „Spoken Ashes,“ Phase Fatale demonstrates his unique ability to build tension, cultivating a sound that vacillates, at times imperceptibly, between fragile tranquility and unsettling claustrophobia. He maintains this tense equipoise throughout the album, frequently counterbalancing the vigor of the drums with layers of lost melodies that hang just above the frenetic rhythm and grainy pulse of electronics. The tracks here are controlled and succinct, tightly wound and relentlessly kinetic. Rarely extending beyond the five-minute mark, the songs are compositionally sculpted simultaneously for physical impact and functional decay.
Payne describes „Redeemer“ as a deeply „personal piece,“ a characterization that is clear upon listening, but doesn’t offer any simple answers. On „Redeemer,“ Payne raises a palpable question tracing the circumference somewhere between the despair and liberation one feels standing at the precipice of cynical ecstasy. This is a techno album, but one that is refreshingly punk. 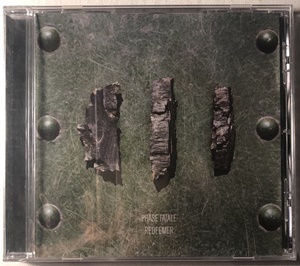