Micromega is an electric guitar experiment in processing, cut-up, and real time de-instrumentation. The 180 gram splatter vinyl LP comes with a wafer USB drive containing 5.1 surround sound videos. The surround video version provides a full environment where a de-perception can be achieved beyond the background threshold of the listener. The two +17 minutes long audio pieces move from pulsing tides of wide-eyed warmth, to blistering and barren landscapes, and back to a reformed transcendence with the fluency and skill of a seasoned musical hand. Pacific 231 has been embedded in the world of experimental music since the early 80s. Through his work, he has consistently sought out and found new sounds, new compositional themes, ventured into unfamiliar aesthetics, and maintained the rare quality of a steady evolutionary path. Micromega will undoubtedly be a significant milestone within his consistently surprising portfolio, integrating video with 5.1 surround sound into the representational gradient.Silent Media SM003 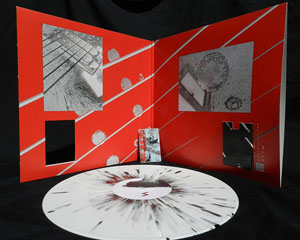