New full length album by Italy’s New Risen Throne which marks a welcomed return to Cyclic Law. „Loneliness Of Hidden Structures“ is the latest chapter of a series that began with „Whispers Of The Approaching Wastefulness“ (Cyclic Law 2007) and continued on with „Crossing The Withered Regions“ (Cold Meat Industry 2009). The first of this series is explained as the annunciation of the end, while the second part was expressing the advent of this end. Now this third chapter speaks of rebirth. Within the caves and ruins left by the destruction, there begins to form the first foundations and structures of a reconstruction that is in turn in constant evolution. The album’s track listing is structurally organized in order to evoke that evolution: 1. The echoes of the end that travel through the empty regions („Into Lungs declining structures“, „Echoes from the loss“) 2. New forms listening to the „silence“ of a new world („Loneliness“, „New Risen Throne“, „Lands filled with silence and grief“) 3. Structures evolving and coming out from the shadows („A vision of the hidden“, „Breath of growing structures“) Filled with New Risen Throne’s now trademark sound of deep cavernous drones, processed voices and percussive moments, this new album is a superb follow up to his now impressive discography. Features exclusive remixes by Nordvargr and Northaunt. Edition of 1000 copies. Enhanced CD with a special Video Clip of the track New Risen Throne (I), comes in a 4 panel A5 folder. 9 Tracks. Running Time 60:00 cycle38 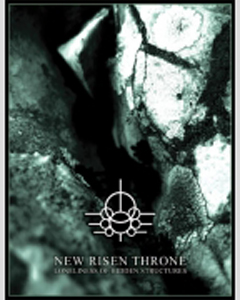