three long collaboration tracks recorded as a result of a spontaneous improvisation April 2008 “live in the studio”; powerful drone melancholy in micro-& macrocosmic ways… stunning 8-panel copper/black digipack artwork by MARCIN LOJEK (who also did the artwork for the recent already much praised NADJA 10″ on Substantia Innominata) This is something you could call a “dreamlike liaison”. When the Canadian “avant metal/drone doom”-duo NADJA (who name TROUM as one of their early influences) and the German post-industrial/experimental drone pioneers TROUM (years ago active as MAEROR TRI who are still discovered by many drone-fans these days) combine their exceptional styles, they form something even vaster as usually known from them. These three long collaboration tracks were recorded as a result of a spontaneous improvisation in April 2008 “live in the studio” near the Weser-river in Bremen, Germany, and suck you in with their powerful & emotional drone melancholy that works in many micro-& macrocosmic ways, using electric & acoustic guitars, bass, accordeon, drum-machine & voice.” [label info/press release] ) Transgredient Records TR-07 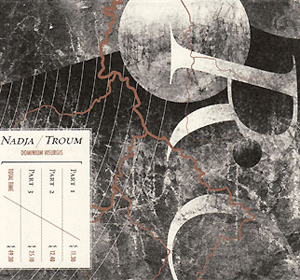