This album was withdrawn by Bryn and replaced by the ‘Betrayal’ album, in fall 1993.
This is the only release of the album in it’s original form as intended by Bryn. The material was recovered from a cassette copy of the album as the original DAT was reused.
Remixes of the tracks “Khan Younis”, “Jerusalem Knife” & “Yasser Arafat’s Radio” appeared on the album ‘Hamas Arc’. The tracks “Caste” & “Amritsar” appeared on the album ‘Satyajit Eye. A version of “Drugsherpa” appeared on the mini album ‘Drugsherpa’. Versions of the tracks “Khan Younis”, “Drugsherpa”, “Amritsar” & “Jerusalem Knife” appeared on the extended ‘Drugsherpa’ album
Track 4 is previously unreleased.
Standard edition: black leather like material sleeve, with gold foil ( limited to 120 copies) and comes with an insert. 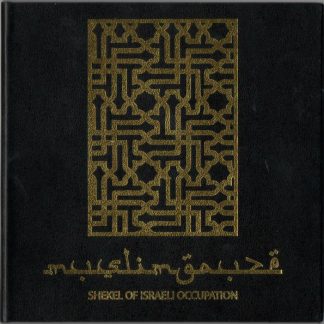