MULLER OF DEATH! – THE BOOK OF SACRIFICE – CD

EBM has rarely sounded so rough and merciless – although MÜLLÉR OF DEATH! have existed for more than a decade. A lot of band-internal changes, a Sunday morning chill-out with GENOCIDE ORGAN CDs and a COIL concert in 2004 turned their image of the world totally upside down and caused the transition of a successful Berlin Techno act to an Industrial band and thus resulted in a change of their name. The Opener „Story of HerrMann“ immediately reveals that MÜLLÉR OF DEATH! are the genuine „AGGRO-Berliner.“ This feeling is intensified by the cover version of the NON Industrial classic „Total War“ and clearly shows the direction they march. They are real idealists and don’t do things by halves. MÜLLÉR OF DEATH! celebrate a Noise orgy and deliver one smash hit after the other. The aggressive vocals of Müller(1) and Müller(2) who certainly have insane voices let this Tour de Force sound even more fierce.
Although abiding to the tradition of „Teutonic Ur-Stahl,“ elements of Dark Ambient, Techno and EBM attacks are added which shall inspire both Old Schoolers and the modern Industrial freak. And no matter which track makes it to the dance floor- it will make it burn.
This extraordinary CD comes in an elaborately designed digipak with a special brilliant varnish 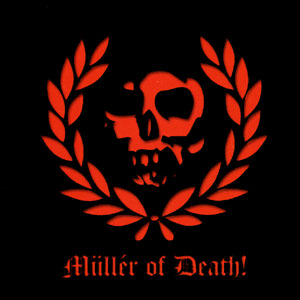