MSBR ( Molten Salt Breeder Reactor ), a.k.a. Koji Tano , was one of the most respected noise artists to arise from Japan’s exciting noise/experimental music scene of the 1990’s. Much of his material was self-released on his own label, the astounding MSBR Records , which was dedicated to the production of limited edition releases with incredible artwork. MSBR present a music elaborated with previously chosen source of sounds, whose origins are either naturel or artificial, with use of Korg guitar synthesizer and some effects, working in analog sounds. Oscillating between Grappling Electro Noise (as he describes his musical style) and pure noise, the really surprising quality of the sound research leads to a tremendous kind of noise-texture.“Ultimate Ambience” is his debut album , recorded in February 1991 and released the following year on its label in 400 copies (the first one hundred copies in special edition with in unique fold out handmade covers using foil, paint, and collage elements). Tano ’s Molten Salt Breeder Reactor divided record into two long track filled with excellent harsh noise with strong influences of musique concrete and electro-acoustic. The great production on this Lp makes it so powerful that it is frightening at times! The record has been pressed on 140 gr black vinyl with black label and black inner sleeve and comes in a deluxe silver silkscreen on Fedrigoni black cardboard sleeve, limited to 199 copies w/insert on Rembrandt deluxe paper with layout by Yoshihiro Nakano. Original audio master from Denzatsu.

From Tribute to MSBR LP booklet released in November 2012 by Urashima with the precious help of some friends of the artist, to remember one of the most important figures of the Japanese noise scene: 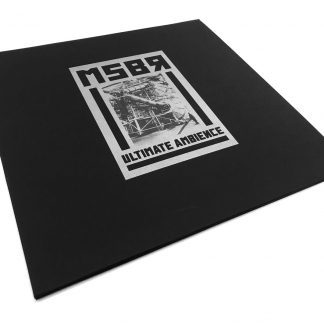