Back from The Dead wi‘ a Mixed Bag of Nuts!

Be pleased to find herein enclosed the new METGUMBNERBONE C.D. “ANTHROPOLOGICAL FIELD RECORDINGS FOR THE DISPOSSESSED”. This two C.D. set comprises of three previously released tracks selected from “DREUN” and two tracks from “LIGELIAHORN”, seven tracks that have only been available as bad quality bootlegs, which would have comprised the never released “FOR THE RAVEN”, three tracks taken from the compilations ARCHANGELS OF SEX RULE DEATH TO THE REGIME (although a slightly different version being the original live recording before gongs were added), SLAUGHTER OF THE INNOCENTS and INTERCHANGE and seven other previously unreleased tracks newly brought up and dusted down from the METGUMBNERVAULTS. Two and one half hours of top quality METGUMBNERBONE enough to satisfy the most hardcore ‚bone head! .

These events were all recorded in the early to mid eighties on low quality portable cassette machines so the sound quality cannot realistically be compared to modern studio recordings or, indeed, most recordings from back then! They were recorded in a number of different locations, the environment being part of the sound. Disused bitumen silos, abandoned railway tunnels, ruins of industry, caverns and caves or outdoors in woods and by the sea. The tracks CHTHONIC and AES SIDHE may sound like they have a lot of tape hiss on them to the uninformed ear but it is actually the sound of an underground river. Urban, and indeed, rural exploration was always as much a part of the METGUMBNERBONE ethos as was the musicks extracted there from.

I’ve no idea what you would class it as? Hexperimental Dark Ambient Industrial Folk Horror? The sounds range from the sublime to the ridiculous, both joyful and mournful by turns. Often fragile, delicate and teetering on the edge of total collapse. Sounding in some instances like the fumbling invention of music or, perhaps, therapy for the unhinged. Hopefully they set the imagination wandering amidst the phantasmagoria of their enactment. 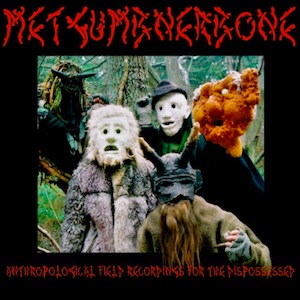