Les Fragments de la Nuit is a blossoming band created in 2005 by Michel Villar (piano) and Ombeline Chardes (violin), score composers for film. In order to play their pieces on stage, they decided to set up a quintet made up of three violins, a cello and a piano. Their music, ranging from tragic to epic and atmospheric was greeted by audiences with unexpected enthusiasm. Some see in it the influence of repetitive music composers such as Philip Glass or Steve Reich, others the melancholic emotion found in the works of Arvö Part or Canadians Godspeed You! Black Emperor. Encouraged by such fervour, Les Fragments de la Nuit have played their music to a growing number of passionate spectators, keeping in mind their motto: «Our music is poetry in which words are notes, a memory in which images are dreams». The ensemble have recently joined Portuguese label Equilibrium Music for the release of their first widely available album, „Musique du Crépuscule“ – a vision of night wrapped in mystery: a night haunted by spectral chants, under the spell of epic, poignant strings and sustained by hypnotic piano pulsations. Its nocturnal universe oozes with hybrid ink, enveloping hidden emotions tainted with melancholy and voluptuousness. A neo-classical or post-nocturnal piece, „Musique du Crépuscule“ has many different faces. It alternates between violin riffs, dark cello projections and the complaints of a lone piano, highlighted by enigmatic echoing voices. EQM022 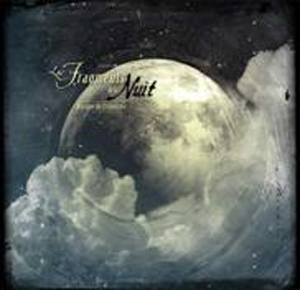