EXTRO-ORDINARY RELEASE by this group – maybe their best one? For people who like Coil and Chris and Cosey, very well arranged perfect recorded electronic experimental sounds and rhtyhtms.
LP (Red vinyl 300 copies)
Digital Download
One of the longest active bands to emerge from the UK industrial scene of the late
70’s, Konstruktivists have spent more than three decades creating some of the most
unique and challenging electronic music.
Founded in 1980 by Throbbing Gristle/Whitehouse associate Glenn Michael Wallis,
the band has featured numerous musicians during the band’s existence, and has
operated mainly as a duo for much of the past twenty years with Mahk Rumbae
(Oppenheimer MkII / Ghost Actor).
‘Destiny Drive’ was written and recorded between 2013 and 2014, and is the first
Konstruktivists album to be released on vinyl since 1985’s ‘Glennascaul’.
The album contains seven completely new songs, exciting and enthralling, pulsating
in darkness, combining abstract, rhythmic electronics with Glenn’s unique, surrealistic
vocals and lyrics.
It is also the first vinyl release on Bleak, a Vienna based label releasing experimental
electronic music. 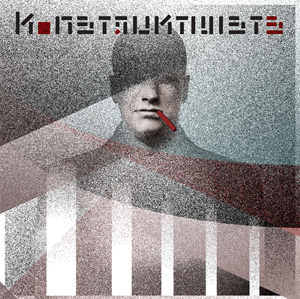