Babel follows the recent and well-received albums “Island of the Dead” (on Cohort) and “Transmissions” (which we released last year). It is an extremely dynamic and dense work that could generally be classified as experimental dark ambient. The theme here is the Tower of Babel and each disc takes a somewhat different yet complimentary approach: the first (“Red Babylon”) is generally a rather heavy and intense recording, while the second (“Citadel of the Nevermind”) is more droney and dream-like. A profound and monumental journey lasting well over two hours. ‘kirchenkampf’, the project of John Gore (Cohort Records, The Oratory of Divine Love, >wirewall<), has been active since 1986. Since that time he has released numerous recordings on his own and other labels. Additionally, John has collaborated with a number of others, including Steve Hall (Yen Pox), C. Reider, and Brett Smith (Caul). The CDs come packaged in a stunning printed gatefold sleeve. (Diophantine Discs) GENRE: AMBIENT, EXPERIMENTAL 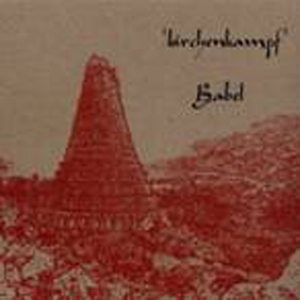