KAKERLAK – THE HEAT OF THE HOLE / TEMPORARY & SUCCESSIVE STAGES – CD

While “NO DESCRIPTION NECESSARY” is the most fitting description for anything with the name KAKERLAK on it, I am sensitive to the fact that there may be a new generation of harsh noise enthusiast emerging who have not been properly exposed, due to his relative elusiveness in recent years. KAKERLAK is one of the elite HN projects active since the mid 2000s, and a defining artist of the genre. His sound wields the most powerful elements of mid 90’s Americanoise as broad brush strokes, mercilessly distilled into crude blocks that sound like the forced melding of rust, rot, and infestation. “The Heat Of The Hole” and “Temporary & Successive Stages” are two of his early masterpieces, originally released in very limited editions on his gutter imprint Thorax Harsh Cassettes, now remastered by Grant Richardson and presented on CD for the masses. 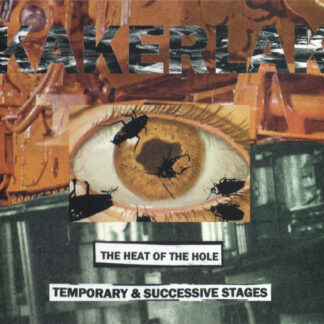