New Forces is pleased to offer a reissue of Jeph Jerman’s „Keep the Drum,“ originally released on cassette by Apraxia in 1990. Since the 1980’s Jeph Jerman has been a key figure in experimental music, from the textural noise of his legendary Hands To project, to more recent studies in field recording and acoustic sound recorded under his own name. On „Keep the Drum“ Jerman explores what he calls „concussion music,“ working with a pile of hubcaps, sheet metal and „other bits of junk“ to rethink the traditional drum kit. The sounds on this disc crackle, pop, and thud. Each tactile scrape conjures up the rusted edge of some bit of scrap-metal as the ambiance of the physical space hums in the background.

As Jerman tells the story, these recordings were a continuation of his interest in “using things other than musical instruments to construct sound works… I think ‚Keep the Drum‘ was also the very beginning of my interest in small sounds. One afternoon Darren Soule brought over a bunch of tiny metal pipe pieces which he had mounted on bent paper clips so that they could be played. They rang like bells, but were very difficult to control. I loved that about them. There’s also a short piece wherein I played small bones, foreshadowing a lot of my later live work.” Recorded on a borrowed 4-track with two battered old mics, “Keep the Drum” is full of Jerman’s trademark textural intimacy. The recordings have been remastered by Grant Richardson to bring them to life without sacrificing their individuality, making these extremely rare recordings once more available. 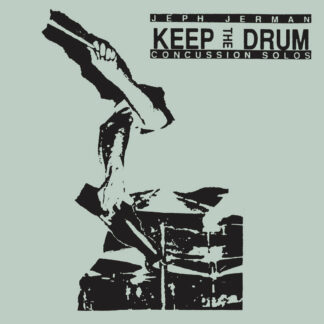