Metanous“ is HATI’s third album on Zoharum, but the first one including new material. Two years after releasing „Wild Temple“ CD (MonotypeRec., 2013) the band is back with a new album which is a summary of the period 2011-2012 when the musicians performed as a trio of Rafał Iwański, Rafał Kołacki and Robert Darowski. It’s the next time in their history when the duo changed their line-up to expand the sonic formula and create music of a slightly different nature. In the case of „Metanous“ the weight of percussion is balanced by the sound of the didgeridoo which exists here not so much as an addition, but a fully-fledged instrument. As usual, you can hear many other instruments making up the sonic world of HATI from the very beginning of the band. Here you can find gongs, drums, bells, found objects, horns and other wind instruments. The sound generated in this new interaction is rich, song structures are usually complex, often based on a dialogue of characteristic
gong-based rhythms with didgeridoo and several other instruments played by Robert Darowski. Here are also acoustic drone explorations, equally important in the music of the group. Once again HATI reveals a new, hidden face. By re-building their line-up or inviting new members or collaborators (so far they include Z’EV, Dariusz Brzostek, Slawomir Ciesielski), Rafał Iwański and Rafał Kołacki still explore new sonic areas.
„Metanous“ is the transformation (of the mind); the work meta Latin means as much as the boundary, the end, the turning point. In the case of HATI, it is in fact the end of that period for Toruń musicians. The group will never return in such a configuration again. This album is a recording of an interesting period of the group included in seven compositions recorded for the purpose of this release. 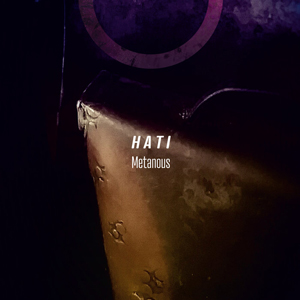