Recorded 2014-2015. SINGLES SIDED
Re-issue of 20 minute tape that came out after Myth Of Blood album. Some
concluded it to be superior material compared to full length. Whether this
is true or not, Freak Animal acknowledges the strength of material to be
worthy of vinyl reissue to keep it available little longer. Constant
demand of the tape version has resulted material to be widely available,
so vinyl edition is quite small.
Three raw yet also atmospheric tracks of industrial-noise, hammering
electronic pulses, distorted screaming vocals and broken sonic waste.
Each vinyl is one-sider, including all the music on the other side and
pasted-on graphics on other side of the vinyl, making it resemble
picture-disc look. Includes graphics and lyrics of the original tape
version.
Side B has artwork pasted on (graphics and lyrics from the original tape version), making it resemble a picture disc. 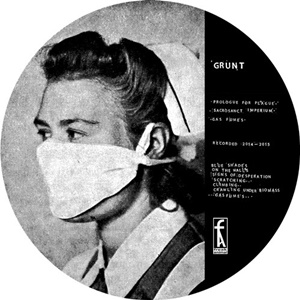