being a member of the legendary, now defunct german industrial project thorofon, geneviéve pasquier released her first work as a solo artist in 2003. her first record, ‚virgin thoughts‘ caused enthusiastic reactions by both listeners and reviewers. the result was a mix of electronic/post-industrial music and 80s-minimal-electro with a frigid but soulful voice. these even tempered tracks attracted a german and international fan base. ’soap bubble factory‘ is geneviéve’s first album on cd – her previous efforts were vinyl only. all 12 cd tracks have never been released and they explore dark, electronic soundscapes (‚elements‘, ‚mind-whore‘), sensuous industrial tunes (‚remember‘, ‚tu es le star‘) and driving retro-electro-songs (‚existance‘, soap bubble factory‘). the vocals are perfectly balanced between being sung and spoken (in english and french) – and there’s even enough space left for a little poem! ’soap bubble factory‘ is a perfect example of an artist converting their roots into something new. if references are requested then there are certain similarities to cosey fanni tutti, caroline k or mrs. arafna / november növelet. geneviéve pasquier is now a name that should be mentioned along with these musicians. packaging: jewelcase edition w/ special paper booklet. 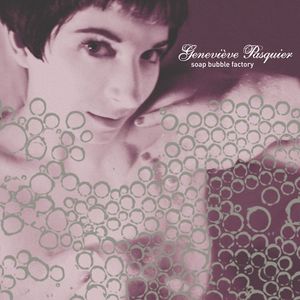