Peter Frohmader alias Nekropolis is a german artist known for his distinct and very dark athmospheric electronic compositions as well as his extreme visual art-projects leading to many exhibitions, films, multi.media-events and collaborations in the field of art and music (incl. H.R. Giger, Chris Karrer…) In 1981 at age of 23 Peter released his first Lp “Musik aus dem Schattenreich” on his own label “Nekropolis”. At same time he produced a series of 4 Tapes called Nekropolis 81 Vol.1-4 which can be found on his comprehensive 2Lp-Release Throughout the 80’s and 90’s Peter released many of his works on labels like Multimoood, Hasch Platten, Auricle, Cuneiform Records, Atonal Records or contributed to Cassette-Culture Labels like Inkeys, Dark Star, Necronomicon while also still releasing works on his own Label Nekropolis. a very limited amount for regular sale this release is delivered as Box-Set with Shirt and special extra Print/Poster. VINYL ON DEMAND VOD118 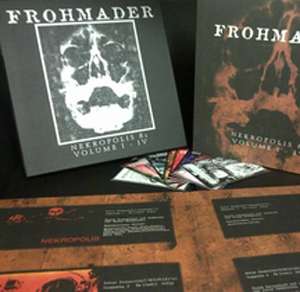