When people associate composer David First with his musical resume, anyone goes straight to his late 70 s avant punk band, The Notekillers and their influential 1980 single The Zipper. Prior to his time in the basements of Philadelphia, he had already played in Cecil Taylor’s ensemble and after the Notekillers broke up he moved to New York City in the early 80s, taking root in the downtown NYC avant garde scene. It was there that First honed his craft for experimental composition and ambient drone which still continues to the present day. Though this narrative made sense, there was a piece missing in the puzzle of First’s musical background. In 1976, two years after playing with Taylor and the year before starting the Notekillers, he enrolled in a class in electronic music at Princeton in the department headed at the time by legendary electronic composer Milton Babbitt. During his time at Princeton, First was introduced to the classical electronic music studio there, a lonely outpost of the famed Columbia-Princeton Electronic Music Center which housed one of the very first Buchla 100 series systems acquired by Vladimir Ussachevsky & Otto Luening. Unfortunately, due to the introduction of digital technology within the music world, this system was left to languish in the studio unattended and nearly forgotten. First fell in love with this equipment and seized the opportunity to compose using the Buchla 100 synthesizer, at first experimenting only with electronic synthesis but later adding in his signature guitar stylings to make these compositions unique to the academic output typical of university music. Thankfully, these compositions were recorded by First at Princeton on various reel to reel tapes and stored away for over 35 years. It wasn’t until the summer of 2012, when David First and Ryan Martin (of Dais Records) decided to revisit and transfer these reels to compile an album presented here as a selection of genuine, uninhibited exploration into modular electronic synthesis. Limited to an edition of 500 copies with liner notes by David First. DAIS053 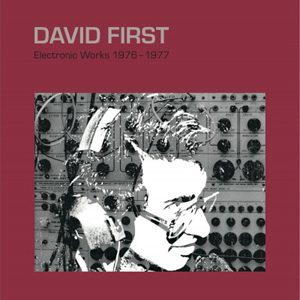