Caroline K was a co-founder of the legendary UK Industrial groups The Pump and Nocturnal Emissions. She played on albums like „Tissue of Lies“, „Befehlsnotstand“ and „Shake Those Chains Rattle Those Cages“. She was also responsible for Sterile Records alongside Nigel Ayers, a record label that released albums by Lustmord, SPK. MB or Konstruktivists. Her only solo album, the title of which was taken from a Philip K. Dick novel, was released on Earthly Delights in 1987 and has never been re-issued on CD. Now Wait For Last Year is a classic of beautiful ambient recordings, with the 20-minute The Happening World being the key track of the record. Very rarely, a slow beat kicks in, but the majority of the music is haunting and melancholy. There is no trace of the Industrial sounds Caroline used for Nocturnal Emissions, the music is homogenic until the end of the original album. In addition, we are offering a selection of tracks that have never been published before. In Between The Spaces 1-3 were recorded after the album but fit in perfectly. They carry the same beautiful ambience as the album tracks, and also a certain sadness that underlies the compositions. As a special treat, we have added yet another very rare track, In A Box from the Sterile Records compilation Standard Response from 1980 that Caroline recorded under the pseudonym S.M. Andrews. Caroline sadly passed away in July 2008. This new and second CD edition has been beautifully remastered and offers much better sound quality than the previous CD version. The artwork has been adapted for a 4 panel digipack, a new CD label design has been added.
Now Wait For Last Year is a masterpiece of understated electronic elegance. Like the hallucinatory drug JJ-180 from the Philip K. Dick novel which the album is named after, these songs have the ability to bend time, only in this case Caroline has utilized a synthesizer for the purpose of warping temporal perceptions. No heavy handed tricks or tomfoolery seem to have been used in achieving this effect. With her delicate touch, she created a pleasing batch of songs perfect for rainy evening meditations.
(Brainwashed, April 2010)
This 2015 edition is simply perfect production with great quality mastering keeping delicate dynamics and depth of bleakness.
(Lust Vessel, March 2015)
KLANGGALERIE gg127-2 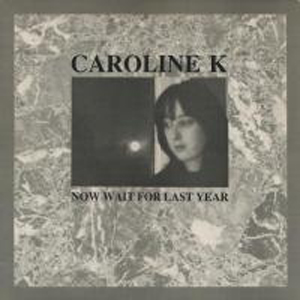