The second full-length studio album in the group’s twenty-year history, Born Again signals startling developments and a radical maturation. Old vines have been cut back and carefully tended in order to bear strange new fruit. Over the course of the twelve tracks that comprise Born Again, Blood Axis explores an epic yet human universe in which gods are summoned, kingdoms rise, riddles are unlocked, love is lost, and worlds crumble. This is psychedelia in the literal sense: a “mind-manifesting” journey through the collective psyche of its creators. Born Again weaves a web of potent pleasures. Whereas the earliest Blood Axis music was marked by keyboards and samples, Blood Axis in 2010 is stripped down to an essential core of natural instrumentation, but with force and bombast fully intact. The sonic ingredients on Born Again include electric and acoustic strings (guitar, violin, bass, bouzouki, banjo), melodeon, piano, highland bagpipes and Galician gaita, marching percussion, the mysterious Annabel-a-tron, and Bobby BeauSoleil’s growling, prison-vintage guitar eruptions circa 1976. Underpinning the album and propelling much of the music is the traditional Irish drum the bodhrán, recorded here with unprecedented power. Moynihan’s ominous voice is well matched by Annabel Lee’s elfin intonations, just as her violin finds a perfect counterpoint in Robert Ferbrache’s protean guitar parts. A selective cabal of guest musicians from Europe and the USA add tasteful embellishments to these deceptively simple arrangements. Shot through by myth and romance, the expressive lyrics on Born Again have their roots in ancient and modern poetry, archaic invocations, and tragic laments. Alongside modern English and German, songs are sung in medieval 10th-century Old English and 13th-century Middle High German. The end result is both unclassifiable and unforgettable: neither folk nor rock, traditional nor avant-garde, modern nor archaic. It is simply Blood Axis. Born Again was recorded over a span of many years in remote locations ranging from rural Vermont to the catacombs of Absinthe Studios in Denver, Colorado. Engineered and produced by founding Blood Axis member Ferbrache, the dense sonic tapestry of Born Again is simultaneously raw and refined, synergistically more than the sum of its primal parts. Packaged in a beautiful gatefold cover, Born Again includes a 24-page booklet with complete lyrics and translations, striking portraits of the band members, and solemn photographic images from France, Germany, Austria, Portugal, and the USA. To everything there is season. For those who are cursed, a time to die and to be forgotten. And for the blessed, a time to be born again: to live on, beyond death, in the minds of men. Now is the time for Blood Axis to be Born Again. The vinyl comes in a deluxe & stunning special printed 3panel foldoutcover with 12 page booklet. EAN: 4038846512124 (STRM-12LP) visit BLOOD AXIS on MY SPACE: www.myspace.com/bloodaxisofficial www.myspace.com/bloodaxisofficial STORM RECORDS 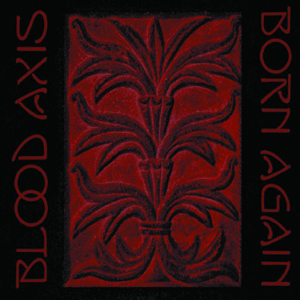