In a year already defined by society coming to a standstill at the behest of a global pandemic, the arrival of Blitzkrieg Baby’s new LP Genocidal Sextacy commands rumination with an acerbic irony. Norwegian artist Kim Sølve founded the project in the early 2000’s, but only in the past decade, one often defined by systemic and civil chaos, did BB make its recorded debut with the Porous Norvegicus full-length. Since then, Sølve has carried forth BB as a timely exploration of humanity’s hubris and callousness, a bleak and pessimistic trawl through the dregs of mankind’s selfishness and cruel arrogance that paradoxically operates as a cathartic confrontation of 21st century existential dread.

“BB is very much a visual and aesthetic concept as much as music and is very much coming from interests I had as a child,” says Sølve. “The duality of always being attracted to what initially frightens you. Much of BB is obsession with aesthetics that I have a negative association with; so much of what I do is based on my own fears. Fears become fascinations. Fascinations become obsessions. Obsessions become art…a purging and an instrument for trying to cope with the human experience.”

Sonically, Genocidal Sextacy implants a sense of sardonic tension into a period filled with political division, first-world entitlement, and the specter of a deadly contagion that has literally upended notions of comfort and normalcy. Rooted in both the sequenced thump of EBM with the dusty specter of death industrial grime and dark ambient unease, Sølve and his BB collaborators (Bjeima, The Right Reverend Mr. B, America Thomas, and Frederic Arbour) have crafted a steady and unhurried oscillation, rhythmic tracks mirroring a sluggish dance of the dead clamoring for reconciliation that never manifests. Everything from Laibach’s militaristic stringency to even Alice Cooper’s gallows theatrics signify themselves over the albums eleven tracks. Vocals appear sporadically over half of the album, the guttural chants (see “Piggy” and “Kill Them All”) echoing the misanthropic sentiments embedded even in the instrumental pieces (“Open Season On Homo Sapiens,” “Fuck Toy For The Death Patrols”). And like all works of art realized with upmost conviction and patience, Genocidal Sextacy commands scrutiny not as a thrown-together repository of fragments and thoughts, but as a narrative-driven journey through the haze of apocalypse and humanity inevitably paying for its destructive arrogance.

Whether audiences in this fraught year find Genocidal Sextacy as a confrontational purge of relentless trauma or a too-close-for-comfort slap in the face of extremely timely anxiety will perhaps depend on the person, but none can deny that not many other albums demand its audience face down the demons within and hopefully search for a light at the end of the tunnel without dooming themselves to infinite repetitions of historical mistakes. Presumably, Blitzkrieg Baby would hope for something similar, but it’s doubtful they’ll be holding their breath. In the meantime, they’ve provided another tough pill to swallow that will no doubt leave fans of uncompromising industrial and extreme electronics clamoring for another fix. 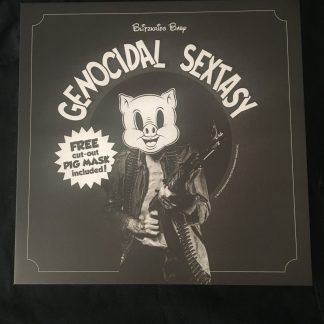