The series of OEC re-releases by Peter Andersson’s (Raison D’Etre) projects continues.
And here we go with the re-release of ATOMINE ELEKTRINE’s much acclaimed debut album first out in 1995.
Labelled as ’new-age-sacro-trance‘ at the time, ‚Elemental Severance‘ actually shows a wide spectrum of electronic styles resulting in a hybrid, yet cohesive masterwork.
From trancey rhythms and dreamy, sacral ambiences to occasional male/female choirs, melancholic melodies and well inserted samples.
As if the imaginary past and present could touch each other, everything is involved by a majestic, unique surreal atmosphere, producing gorgeous sounds that leaves you truly mesmerized.
This expanded double disc redux version of ‚Elemental Severance‘ original album, first released on Cold Meat Industry in 1995, has been carefully re-recorded and mixed in 2015 for a more enhanced and contemporary experience.
The extensive extra material, taken from the same recording sessions as ‚Elemental Severance‘, has in part been reduxed else transfered from original master recordings.
Atomine Elektrine is a side project of Peter Andersson, the mastermind behind the dark ambient industrial project raison d’être.
Atomine Elektrine, with thematical interest in the vast space and small atoms, is named after a nuclear power plant and is partly inspired by the electronic space music of the 70’s.
Composed by Peter Andersson 1992-1994.
K-14 level mastering 2015.
Sleeve design by Peter Andersson. 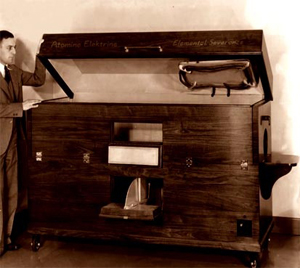