for a dehiscent blain we are much obliged….

…these were merry tidings: in 2012 it was 23 years ago that the founding of anenzephalia had took place.
since the dying pushed open gas chamber doors and inhaled fresh sounds, the diseased exploited rattled and shook their beds and graves, those in the shadow considered enlightment. therefore if anything this release was and is a trifle, another vain, limited document praising those already knowing and being sick of believing, rather than another piece of mechanical consumption. b/m 2022

limited edition of 250 numbered copies on heavy black vinyl.
9 tracks recorded by b/m in 1989 at thee Rottchamber and are the first anenzephalia recordings ever.

important information: the posession of this record entitles to download additional two tracks: ‘clan-na-geal’ and ‘untitled’ from a munich performance in 1992 that were part of the original 23 tape!

formerly released as MC in Edition of 100 copies on Zaetraom 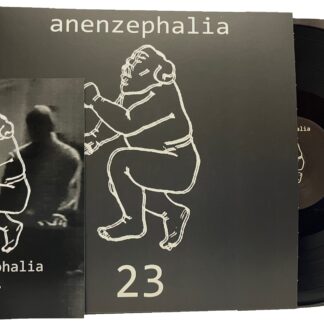