Thalassocracy consists of songs Andrew King usually performs unaccompanied, mainly of a nautical theme. They were initially recorded as unaccompanied performances in late 2006, after which the Art group Brown Sierra constructed suitable arrangements for each song, from which they and King, in close collaboration, devised final arrangements over the subsequent 18 months. This is an unashamedly “difficult” album, an experiment that includes field recordings, Musique concrète, and home made tone generators, the 70 minutes of which (consisting of four instrumentals, six arranged songs and one unaccompanied song) add up to what is probably the most left-field album of traditional songs in existence! Nonetheless, it was not the artists’ intention that this release should simply be an exercise in experimentation for experimentations sake, but rather that its should be an exercise in seeing what could be produced by the happy combination of two conceptual artists – who have a knowledge and understanding of vernacular culture – working in close collaboration with an expert in traditional song, who has a knowledge of, background in, and understanding of experimentation. As such it is a release that avoids such glib categorisations as experimental, improv., traditional, folk, or neofolk. The CD was mastered by Hunter Barr at Retina II studios. And comes with a 12 page lyric booklet. The running order is as follows with [i] denoting an instrumental, and [u] an unaccompanied song – 01. HMS Advance 2:47 [i] 02. Nancy of Yarmouth 7:05 03. Banks of Green Willow 5:18 04. The Good Luck Ship 4:01 05. Polly on the Shore 7:40 06. HMS Resolution 3:37 [i] 07. Nelson’s Death 5:49 [u] 08. HMS Audacious 5:23 [i] 09. The Captains Apprentice 5:33 10. The Dark Eyed Sailor 5:00 11. The Bold Princess Royal 5:20 12. The Bonnie Bunch of Roses 8:30 13. HMS Defiant 4: 21 [i] Total time: 70: 26 [Thalassocracy] recreates the mood, the sense of danger, anticipation, loneliness, harsh living, conflict and the ever distant prospect of home. While the settings may be unconventional, even challenging to some these are compelling, authoritative performances from an artist with a growing treasury of work to explore. Mark Coyle – Woven Wheat Whispers The album creates a wonderfully interesting juxtaposition of traditional folk-style vocals and more modern sound sculptures, noise and field recordings that come together surprisingly well, with one complementing the other brilliantly, as they project an unusual and somewhat unique output, whilst maintaining a hugely interesting atmosphere and sound throughout. Lee Powell – Judas Kiss [Thalassocracy is] a clash of two completely different worlds, when Andrew’s archaic and for today pretty unique way of singing old folk songs meet these futuristic and unclassifiable soundscapes? an original experience. Markus Eriksson – The Shadows Commence Here we find thirteen tracks, a few of which are instrumentals that are, quite frankly, indescribable? Thalassocracy is an ever interesting and truly unique piece of music. Scott Broderick – Zero Tolerance Dour and Indigestible… [&, from another review]…Not much fun to listen to. Simon Collins – Heathen Harvest King’s delivery enacts the narrator’s falling breath…Even at the fringes of underground music, the drive to rehabilitate and re-imagine Britain’s folk and ballad legacy shows no sign of abating. Rob Young – The Wire Best Album of the Year: King’s vocals colour the narratives he tells so beautifully while the Brown Sierra flesh the tales out into full surreal environments. “Thalassocracy” is both a difficult and intoxicating listen. Cory Card – Foxy Digitalis This is one depressing and grim record…every song in his mouth is imbued with that terrible darkness…Meanwhile Brown Sierra…provide some of the most stark and difficult examples of electro-acoustic music I have heard in a long time…Impossible to categorise this highly unusual piece of maverick English music…most listeners will find the results very far away from the ‘entertaining’ end of the scale. Me, I like it! Ed Pinsent – The Sound Projector 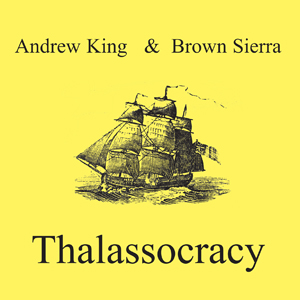