Following on from that hugely sought-after Green Graves issue by Rainforest Spiritual Enslavement, Hospital Productions re-examine the longstanding intersection of Industrial and Ambient music on this exceptional collaboration between two of the label’s most interesting producers.
Originally released in a private press run of handmade tapes, the collaboration was made in person with Alberich and Lussuria making use of digital synths in homage to that distinctly European scene of the mid 90’s that combined hardcore Industrial textures with Ambient pulses. It’s a sound you’ll be familiar with if you’ve immersed yourself in the most unnervingly quiet sections of the last few Prurient albums, building a kind of futuristic soundscape situated somewhere between David Lynch, Kevin Drumm and a more dystopian variant of Brad Fiedel’s distinctive soundtrack to The Terminator.
Alberich’s instinct for harsh propulsive rhythms is here tempered by Lussuria’s weird topography, the digital rendering adding a kind of artificial foundation quite removed from the throbbing earthiness you’d find on a hardware session. Instead, the more linear trajectory of so many dark Ambient excursions is replaced with a constantly shifting landscape, veering from an oddly displaced vocal narrative into pounded, crumbling rhythms at some points, while those sinking subbass sands keep things resolutely atmospheric for the duration.
There are no concessions to that blackened aesthetic here, if you were into Green Graves or want to immerse yourself in one of the most brutally atmospheric albums you’ll hear this year, we urge you to check it out. HOS474 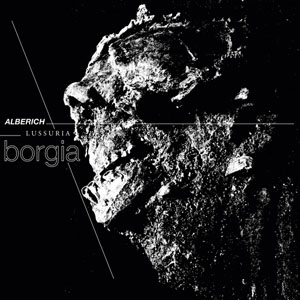