AABZU – THERE’S NO OTHER GOD THAN RAMBO! – CD

Maciek Szymczuk and Łukasz Szałankiewicz. Two restless spirits. Working together since 2002. The first result was released on „Nowe:le“ (Rec Vivo, 2002) – a song „There’s No Way“, still credited to Zenial vs. Maciek Szymczuk. In 2005 AABZU’s debut album „The Shape of Lost Things“ (Simple Logic Rec – split from PHYRL) was released, presenting a world of delicate structures, based on all kinds of glitches and ambient, repetitive backgrounds. Next years the group spent on playing concerts in the country and abroad, participating in many festivals such as UNSOUND, ELECTRO-MECHANICS, WRO and MPM Ambient Gorlice. In the meantime, the duo was preparing the material for their second album. „Rambo“ was published in 2010, thanks to AudioTong, picking up rave reviews and is not taking prisoners, just like the title character of this release. Music, richer and more diverse than on its predecessor, sparkles with many colours and remains, despite this heterogeneity, consistent. In one composition, Mian Mian, a Chinese writer (known for „Candies“), recites excerpts from her new book. ZOHAR 007-2 IYHHH 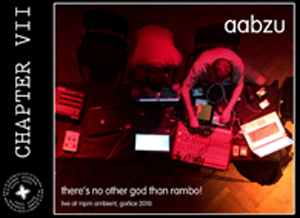