Backwards is very pleased to present the REISSUE of this amazing VOX POPULI! album originally released on cassette (1985) by Cause And Effect in the United States.

Self-labeled as an ethno-industrial project, Vox Populi! is one of the most intriguing and original band emerged from French underground.
These recordings were made between 1980 and 1985.
This amazing release presents 7 tracks of analog experimental ethno industrial music!

The vinyl comes in an elegant silkscreened cover with printed inner-sleeve. 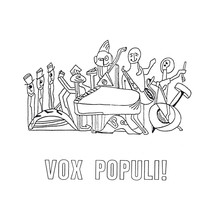