Vhril began as my own solo project in 1991, initially as a clandestine extension of my Thule Society music. John Murphy and I had been friends since the early 1980’s and had long wanted to do some duo recordings together. We had contributed to each other’s projects on several occasions, and played live together, but had not yet formed our own project. He became interested in the Vhril concept due to its historical and occult associations. Vhril explored the esoteric concept of the Vril topos, the Black Sun and Thulean paths in an improvisational ritual setting. I used the spelling of Vhril with an ‘h’ to emblematize it as our own version of the Vril-Gesellschaft and to avoid confusion with other forms of Vril already in existence.
So John joined me and we did two Vhril albums which were released on my label Zero Cabal. We had the idea that we were creating Vhril as a kind of symbiotic twin being, and decided to invoke and use ‘magickal’ royal names such as the Duke di Stortion, the God-King and Sir J. Arthur Ferrero (John apparently had some relational ties to the Ferrero Rocher chocolate family!). We would record material during extended candlelit sessions, to be formed into specific tracks later. John would bring tapes of material he’d recorded elsewhere and we’d use that as a basis to add other sounds to in my studio in Melbourne. Later on, when John went to live interstate in Sydney he took the Vhril idea with him and morphed it into his own Shining Vril project.
Ulex Xane,
May 2016, Melbourne, Australia
Recorded in 1993.
A 250-CD edition in a glossy full-colour Digipak. 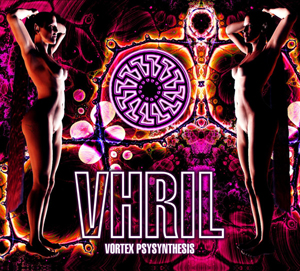