(2xC30 professionally duplicated audio-cassettes, silkscreened blue and white shells, in jewel case with printed inlay lim. ed. of 100 hand-numbered copies out now UMRIJETI ZA STROJEM is a project by prolific Croatian artist Sol Ist, who is already known to TREUE UM TREUE followers as one half of the band NARROW. Most of the project’s output so far has only been available in very confidential CDR editions – with the notable exception of the split 7″ with NEITHER NOR released in 2010 on GENETIC MUSIC. “Ponavljanje je majka ucˇenja” (translating as “Repetitio est mater studiorum”/”Repetition is the mother of study”) is the first retrospective by UMRIJETI ZA STROJEM directed at a larger audience. It collects the project’s entire recording history from late 2006 up to 2012, and consists of not one, but several releases on different formats. The first is a CD released earlier this year on Croatian cult label Slusˇaj Najglasnije!, gathering collaborations, remix works and isolated pieces. The second is this double cassette, which contains all original material by USZ released on limited CDRs over the years. Tape 1 presents “Pogled u nefasizam”, USZ’s first mini-album from 2011 (also featuring gorgeous contributions from close friends ZAGROB and former Narrow associate ROBI) and tape II consists of all official 3″ singles. Musically, USZ delivers a chiselled, melodious but still minimal form of electro-wave, like the perfected jewel for which NARROW was the raw stone. The influence of electronic noise is still there but has receded somehow to make room fore a more emotional sound, which allows for both cool, efficient beats and warm undercurrents, and builds the perfect setting for Sol Ist’s deep, unmistakable voice. Tut022 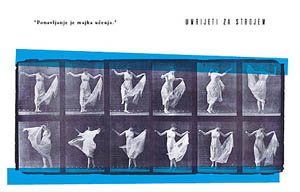