Second vinyl release in Kreuzung series of collaboration between Reutoff and their musical friends. This time the brothers-in-arms were German drone ambient combo Troum. The basic sound sources and samples made by Reutoff especially for this release have been treated, arranged and mixed with an addition of their own instrumental parts by Troum. Dark profound harsh ambient with some occasional rhythmic patterns intertwined with transcendental prepared guitar loops and perfect drone noises – a perfect blend between two project distinctive features and creative manners. The concept of this work is based on cosmology of Hildegard von Bingen. The first three sides of this double LP contain the tracks previously appeared on this album CD version released in 2008 by Ewers Tonkunst/Indiestate Distribution which is now sold out. The fourth side contains two more collaboration tracks made by the bands which are exclusive to this vinyl set special folder cover made of kraft paper with big full colour sticker attached · in white generic inner sleeves transparent green vinylsEwers Tonkunst HHE 019 V 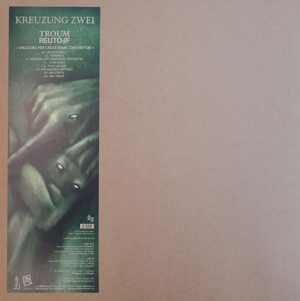