Liner notes:
this album is inspired by an exceptional dream that occurred to me in april 2008: in this dream, martin and me were visiting a friend who lived in the countryside, in a place that very much resembled a remote village in the mountains of southern tuscany i had visited shortly before. thus, everything about the area felt familiar; we were talking, recognizing things, when we entered a small chapel, and suddenly there were many more (known and unknown) people inside and outside the chapel. the whole atmosphere turned solemnly ceremonial; in a way we had encountered before as well. an absolute heavenly harmony began to resound as we went outside again, and it struck me to the very core, i was nearly moved to tears. only as i awoke, i realized the repetitive lyrics of the chant that was connected with the harmony: “vorbei der tod”. with that harmony still in my mind for hours, i tried to capture and record it the same day. this is the dream theme of this album. (baraka[h], autumn of 2019)

ignacio matte-blanco was a chilean mathematician and psychoanalyst (1908-1995) who developed a new way of understanding the unconscious, relating to the theory of sets. according to matte-blanco, the unconscious can be seen as “infinite sets”, based on the principle of symmetry (establishing the identity between the whole and the part). on the deepest levels of the unconscious there exists pure symmetry, there’s no difference anymore between one thing and another – all things merge = symmetrization. at this deepest point, even life and death are not distinct anymore. in dreams, music, art and certain psychiatric phenomena like schizophrenia we can approximate that level. it is also the ultimate point where any organic life process (single cell, seed) starts, and ends. though we are not able to reflect on the “indivisible modus of being” (the unconscious), we can feel its presence as an infinity that elevates us, deeply affects us, determines our lives.

everything recorded and mixed through many years until 10/2019. the whole is mainly based on a live program performed in different versions 2012-2013 in poznan (imperial castle), bremen (solar drones festival / ms stubnitz), moscow, menuo juodaragis festival in lithuania, essen (denovali swingfest), darmstadt (zugzwang-festival), stockholm (fylkingen) and osnabrück (european media art festival).
cover photos taken from sylwia partyka’s untitled video which was shown at these concerts.
endless thanks to ignacio matte-blanco and bernd oberhoff for the inspiration, to katrin for the encouragement, to sylwia for the video work and much more, and to holger and stefan for the opportunity. troum, november 2019. 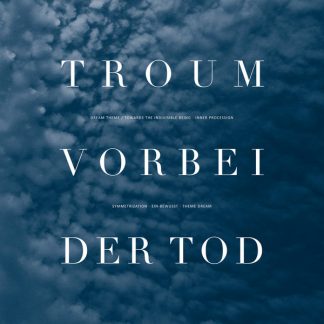