@found.remains is proud to present the rerelease of the long sold out Terror Cell Unit album, Psalm 137:9, on pro Digipak CD. Originally released on vinyl in 2018 by @bacteriafield, Psalm 137:9 has been remastered by Grant Richardson (@turbonasty) and includes the two songs from the limited cassette, The Same Bird. This CD release also features new collage work by Sam Torres that compliments the collages used on the vinyl edition.
•
Terror Cell Unit is the stern power electronics duo of Mac Chami (Koufar) and Sam Torres (Crawl of Time). The first shot fired by TCU was on cassette in 2014 on Chami’s own label, Crown Tapes, with more shots fired on cassette through accomplices Bacteria Field and Fusty Cunt. These releases dealt with the complexities of American violence, terrorism, and Christ, but it was in 2018 that TCU unleashed their magnum opus, Psalm 137:9.
–
Psalm 137:9 homed in on the 1995 American tragedy that was the Oklahoma City bombing. Carried out by Timothy McVeigh and accomplice Terry Nichols, a Ryder truck containing over 4,800 pounds of explosives was parked at the Alfred P. Murrah Federal Building and detonated remotely; the explosion killed 168 people, 19 of them children, and severely injured hundreds more. Until 9/11, this was the deadliest act of terrorism on American soil and a horrific example of a man’s stringent conviction that the government pay the ultimate price for Ruby Ridge and the Waco siege.
–
Refusing to simply regurgitate the story of the bombing or to showcase the violence for petty shock value, TCU instead thrust themselves into the psyche of McVeigh and the rubble of the bombing to channel the complexities of the tragedy. “Suicide Mission Part I (Planning)” starts the album on a foreboding path with beats creeping in and out as heavily modulated vocals further increase the tension and conjure the image of a radicalized McVeigh repeating excerpts from The Turner Diaries to himself as he drives the Ryder truck to its final destination 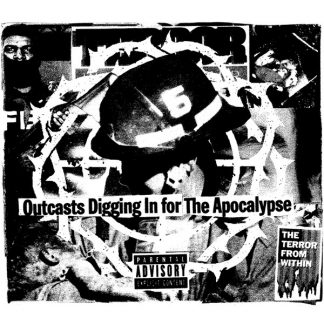