“Still to this day, after thousands more records have made my ears bleed, ‘Confesso Tutto!’ remains among my all-time favourite pieces of music” J. Weber
“On naviguait en eaux troubles … avant de décoller vers des sphères cosmiques” L. Maurice
Teatro Satanico 2019 double-CD album THE TUNNELS OF SET (OECD 277) marked a radical break in their sound.
So it was time to stop and to reconsider their previous music production in order to see how eventually they delivered themselves to the post-kosmick khaos-magick meta-psychedelick droning-noise they play live today.
The double-CD “KDK” (named that way after the names of their actual and former members: Kundalini, Devis G. and Kalamun) could be perceived as a sort of “The Best of”, but indeed it is more a sort of sonik biographical story, a tale made of gathered weird tracks from 1993 to 2018.
Here, for the first time collected in a proper and official CD issue, remastered by Devis G. himself, you will find their most notorious tunes COMANDANTE BRUNO and CONFESSO TUTTO! But you may find some very hard to find tracks as well, like ORRIBILE COITO, from nearly impossible to find cassette compilation PORNOGRAPHY released by B.V.Tapes in 1993, or DIOS SATAN, a Teatro Satanico tune that featured almost anonymously in a vinyl LP released by some fiends of them in 2014 , or even FINE VELOCE ED INDOLORE, a 2018 track released by Circolo 23 in only twenty-three 5” lathe-cut discs.
There’s also previously unreleased material like the throbbing 777, a track recorded during a live-gig done in the middle of the night of July 7th 2007 at Giardini Malaspina, Pavia (Italy).
There are remixed and remastered versions of some of their second-phase infamous underground failed-hits like BABY BABALON, LA’-BAS, ULRIKE MEINHOF or SEX MAGICK, ROCKETS, BABALON too.
If an official reissue of old Teatro Satanico stuff is what you wanted, KDK is what you get!
Double CD digipack edition with forewords by J. Weber (Novy Svet) and L. “Maury” Maurice (Niedowierzanie, Wermut) and cover-art drawing by Nathalie Antonello. 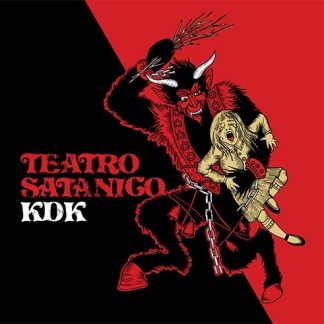