SIEBEN – NO LESS THAN ALL – CD

No Less Than All’ was recorded at Redroom studio, Sheffield, England, in 2011. It was written, performed and produced by Matt Howden, with the exception of track 5 which is a cover of Joy Division’s “Transmission’*. Thanks for listening. (*Written by Ian Curtis, Peter Hook, Stephen Morris, Bernard Sumner; published by Universal Music Limited). Mastered by Dan Worrall @ Platinum Ears Studio: dan@platinumears.com Artwork by Martin F. Bedford: www.martinfbedford.com Track info: Music is light: As the octaves rise, music does indeed become light. It is simply a wave, after all. But what a wave. Preacher online: This song started life by virtue of the fact that I found an online U.S. preacher named Matt Howden, whilst searching out some reviews for press purposes. The diversity of life, and the lives we lead will never cease to amaze and inspire. I saw a face: Not strictly in a cloud, as the song goes, but actually a photograph: This photograph, by Jérôme Sevrette was the inspiration for the song. Vonnegut: Kurt Vonnegut remains one of my all-time favourite authors, especially the novels Mother Night and Slaughter-House Five. A song for them and him. Transmission: This time, one of my all-time favourite bands, Joy Division. The first-ever Sieben cover to appear on one of my releases. Shake the tree: It started with a political/ground-swell/people-power type theme, but went its own way as a song and ended up a bit tree-huggy artist. I do love that feeling of creating something from nothing, a blank page being filled. Black dog day: The other end of the spectrum of human emotion from the track above. No ordinary life: No life is ordinary. It may think it is. It may be stuck in the moment, stuck in the basics of necessity, but all life is wondrous and monstrous in its palimpsest layers. He can delve in hearts: Watch out for him. In a train: Personal. No less than all: Re-vamped from the 2001 Sieben album ‘The Line & The Hook’. I had to change where the chords went (and now don’t go) in the chorus as this song was written before I went loop-led-crazy. It has a more stately feel than the original, and is more laid-back relentless. Music is light, Part II (play me again): An enticement to play the album once more… redroom008 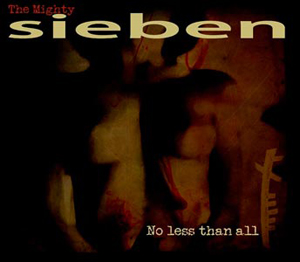