Black Vinyl (Ltd. 200), Red Vinyl (Ltd. 100)
Some albums are catchy, some are bulky, some immediately stick to you, others touch you. “Death Trance”, the terrific new opus by RxAxPxE is far off these categories. It contains an aggressive world of sound, composed of menacingly clattering frequencies merged with low, massive tones and their ritualistic dimensions into a rustling, shrill, mangling mix of Terror Noise and Power Electronics. A pulsating, rhythm-based, and occult beginning with woven-in murmured and asphyxiated conjurations rises up, then changes to an unnerving, screaming rag of sound, only to be finalized by a rite of nonterminating deepness, that is accompanied by whispering and tortured screams. This album is blackness incarnate.

Since 2005 RxAxPxE is the epitome of occult, ominous, sepulchral works sprung from a distinctively sinister mind aloof any modern hypes and trends. No attention-whoring, no networking. Only one thing: Glorification of the Dark One through the most disturbing, sick sounds directly originating from the depths of the human soul. Every release is a ritual performed, every track causes unadulterated destruction.
Three malign invocations, 30 minutes of only the darkest art of sound… 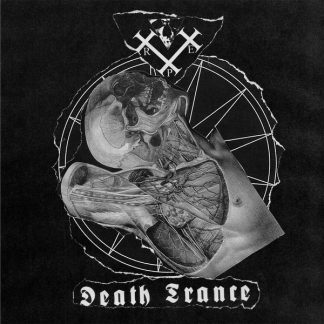