The third volume in our ongoing series of albums collating Rapoon’s rarities from 2003 and 2004. As always it’s composed of 2 discs. The first one features two rare releases; number one is “Monomyth: Par Avion” CDR (limited to 199 copies only) is a source material for a collaborative album with Birds of Tin, and number two is “Jane from Whitley Bar” 7″ vinyl plus a number of tracks from compilations. The second disc is a real treat as it contains a previously unreleased recording from a 2004 gig in Vienna.
The CDs is housed in a digipak sleeve and the album is strictly limited to 500 copies. The cover was designed by Maciej Mehring based on Robin Storey’s paintings. “Seeds in the Tide Volume 3” was mastered by Łukasz Miernik. The whole production process was overseen by Michał Porwet. 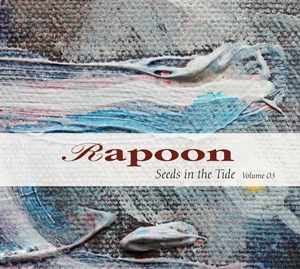