Transformation is the key to the psyche.
It unlocks the hidden domains inside us and finds the paths to inner wisdom. ‘Metamorphyses’ is a journey into the deep inner self; a drama of the sublime and trancendental transformation of the psyche through a katabasis ritual presented in six transitional stages slowly moving towards completion.
‘Metamorphyses’ is the key to the psyche.
Hypnotic, introspective and yet more difficult.
Being the seventh fullenght album from raison d’être, ‘Metamorphyses’ is in many aspects different from previous works by Peter Andersson.
The organic flow and the use of drones has been extended, creating a varied output of both calm/meditative and harsh/intense sound structures.
The transformation in sound is also present in the perceived emotions.
Demanding, tempting and deceptive are only a few elements that characterize the ordeal the listener has to withstand.
The expanded double CD edition of ‘Metamorphyses’ contains the original album remastered according to the K-14 leevel standard.
Additonally, two previosuly unreleased early sketches from the ‘Metamorphyses’ session has been added to the first disc.
The second disc contains a selection of previously unreleased live recordings from performances made between 2006-2008 in Sofia, Gent, Salzburg, Alkmaar and Budapest.
Comes in a 6-panel digipak with original art by Kati Astraeir.
OLD EUROPA CAFE OECD202 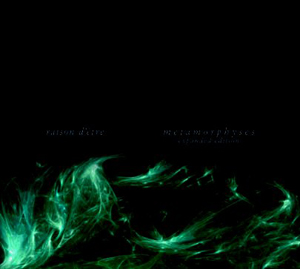