black vinyl edition.
deluxe packaging includes:
– each record in its own individual printed jacket
– large format two-sided poster
– all copies of the box include a download code of the complete album.
– all housed in a sturdy black linen wrapped and pigment stamped debossed box with tip-on cover.

PRURIENT ANNOUNCES ‘RAINBOW MIRROR’
7xLP to coincide with 20th anniversary of the project.
rainbow mirror is a release exceeding three hours in length, consisting of new material that delves into the glacial, meditative, and ambient side of prurient creating an epic of pure ‘doom electronics’. rainbow mirror, which will coincide with the 20 year anniversary of prurient, is a project that is steeped in history and origins, and will be released as a 4xcd and digital through profound lore on december 1st with the 7xlp vinyl edition to be released on hospital productions. the cover art for rainbow mirror is the first collage created in the pre-recording era of prurient.
like the first prurient live performance 20 years earlier, the rainbow mirror lineup consists of three members. for this exhausting work, fernow called upon matt folden (dual action) and jim mroz (lussuria) to form the trio. all of the material was recorded live at hospital productions in nyc and later meticulously mixed and produced by shifted in berlin with expert mastering by paul corley.
rainbow mirror marks the second alliance between profound lore and prurient and stands as another singular work amongst the vast repertoire fernow has amassed under the prurient moniker. while familiar moments from frozen niagara falls album can be found within the massive scope of rainbow mirror, through the three-plus hour duration of this rural ambient industrial creation, rainbow mirror is a monolithic, crawling psychological noisescape of time-stretching electronics, layered counterpoint feedback, machine loops and maximalist pulsating synth passages.
like the infinite and distorted reflections produced by a hall of mirrors, rainbow mirror is a portrait in perpetual tension. 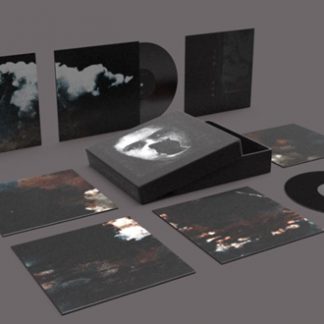